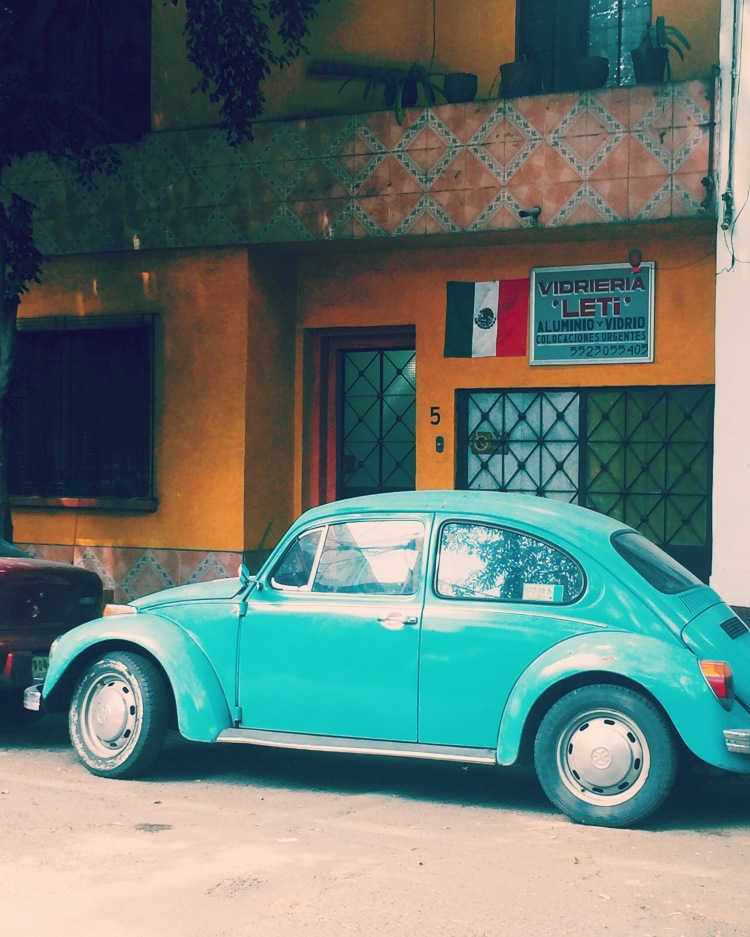 After getting over 12 hours of sleep, I woke up feeling refreshed and ready to take Mexico City on by storm. I set out to find street vendor tacos for breakfast. Gerardo had recommended his favorite local taco place called Tacos Hola. Only a two minute walk from where I am staying – Tacos Hola is a busy taco place and a favorite among locals. A little confused with the ordering system, I ordered pork tacos with guacamole and queso. It seems they only give you one taco at a time then when you finish you go back up to the counter and order another. I’ll know for next time. The best part is it’s only $1 a taco!

Next door was a hip coffee joint where the employees looked like they came straight from Seattle. I grabbed my favorite coffee, which embarrassingly enough is a decaf almond milk latte, and set to stroll around the neighborhood.

A university student named David, who I had been doing a language exchange with two months prior to my trip, messaged me and invited me to meet him at his university. He told me it was pretty easy to get to by bus. This would be my first experience with the local public transportation and for only .50 cents I thought, why not?

I found the bus station but couldn’t figure out how to get inside. The station was elevated from street level with no entrance that I could see. I asked one of the guys waiting to catch the bus to pull me up on the platform. He showed me where the entrance was and informed me I had to purchase a bus card. Trying to figure out the bus card machine was a whole other nightmare. When the bus arrived it was so full that I swear people were pressed up against the window. I pushed my way on and road for a few stops. When my stop came there were so many people pushing to get on that I couldn’t get off! I took the bus to the following stop and realized I’d have to be more forceful in order to get off. After some confusion and help from some locals – I figured out how to get to the university. 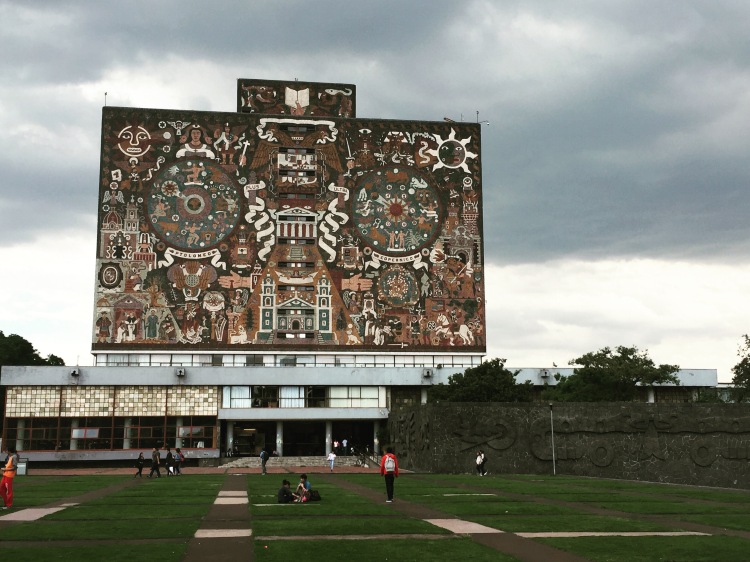 National Autonomous University of Mexico or UNAM is the largest university in Latin America with a student body of over 342,542. David gave me a tour of the university and shared with me some of its history. The pool and gymnasium were built for the 1968 Summer Olympics. One of the buildings also has a famous mural by Diego Rivera. The campus was truly amazing and full of students hanging out, smoking weed and enjoying the sun. 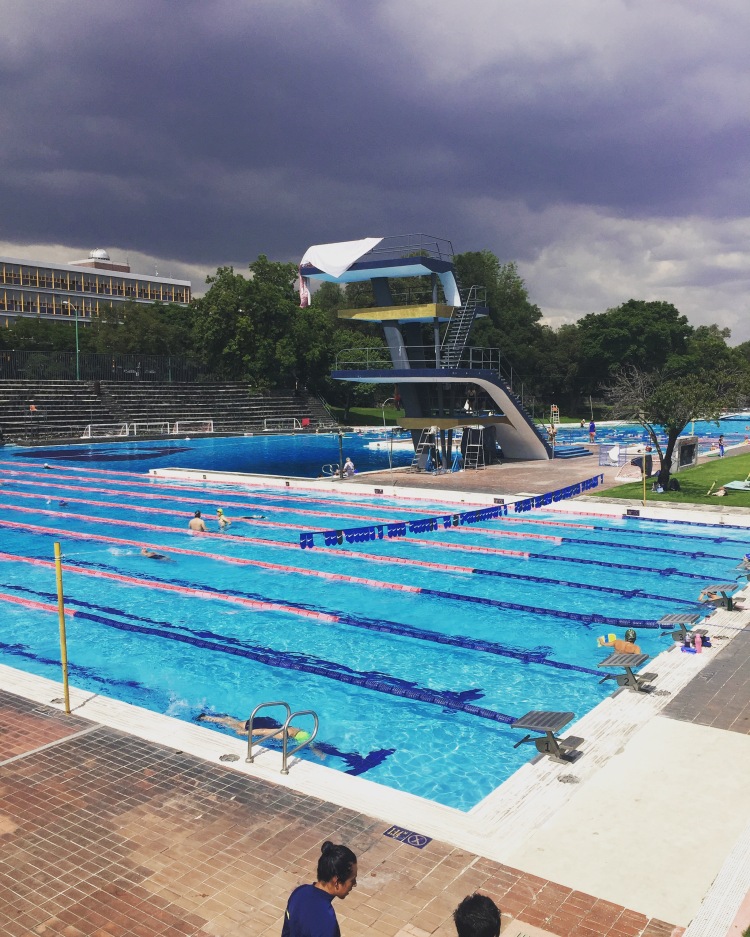 My favorite part of the school was definitely their gym. Full of old equipment from what looks like the 1980’s, it was packed with students and faculty working out. David informed me that they often play 80’s classics such as Eye of the Tiger to add to the ambiance. 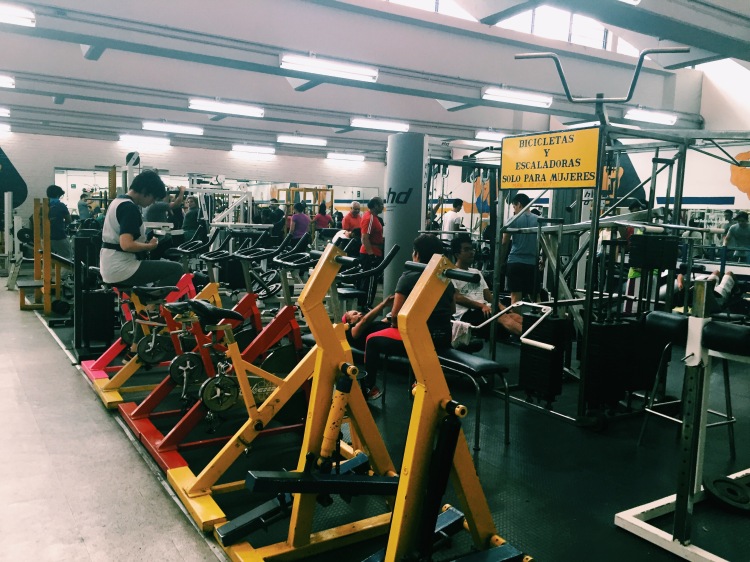 We met up with a classmate of David’s named Jorge and the three of us headed to their boxing/salsa teacher/friend’s house, an Argentinean man named Omar (who I have nicknamed Renaissance man). Omar lives in the beautifully historic neighborhood of San Angel. Omar’s home opens up to a courtyard in the middle where we ate a delicious lunch of chicken, vegetable salad and matte. Matte is a traditional Argentinean drink that is very bitter but gives you sustained energy. At lunch Jorge and David kept telling me all the things Omar knew how to do – in addition to being a boxing and wrestling coach, Omar was also ballet dancer at one time. He also teaches Cuban salsa and invited me to attend his class that evening. 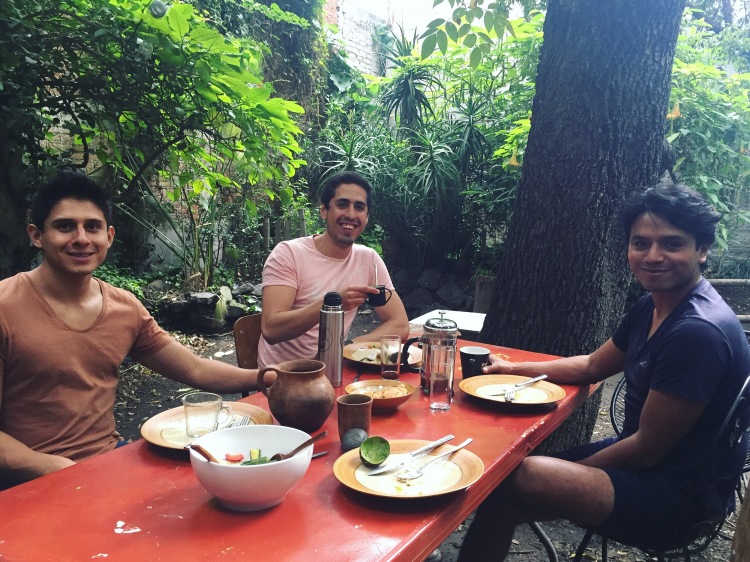 The class was amazing but also difficult. All instruction was given in Spanish with students who seemed to have been at this for quite some time. The focus on tonight’s class were two turns, one called dile que no and the other excalibur. I am someone who cannot spin without getting sick. Rides that spin, forget it. Even merry go rounds, it’s not happening. Being the trooper that I am, with the eagerness to learn, I hung in there – spin after spin after spin. Finally, with only five minutes left of the class I thought I was going to throw up everywhere and had to bow out. I felt like throwing up for the rest of the night but was thrilled to have mastered two turns in Cuban salsa.