I caught a bus the next morning from to Morelia – which is located about 5 hours to the West from Mexico City. My plan was to be in Patzcuaro, a small indigenous town just an hour away from Morelia for, El Día de Los Muertos. My new Couchsurfing host, Angel had contacted me through the website. Angel is an architect for Cinépolis, a worldwide movie theater company. He was nice but a little anal. Angel walked me through how to use the keys to open the three separate gates to enter his apartment building. Then he wanted me to demonstrate to him I knew how to do it. I’ll admit, it was a little difficult.

When I arrived, I was completely exhausted and could care less about exploring Morelia. I decided to nap. My friend Alexis back in Seattle had recommended that I come to Patzcuaro for El Día de Los Muertos. She connected me with Alejandro, a friend who she had met a few years prior while volunteering at a monarch butterfly sanctuary in Morelia.

The next day Alejandro picked me up at 3pm. He had invited me to an event he was working at for El Día de Los Muertos. I hadn’t heard too many of the details but it sounded fun so I was in.

After picking me up we headed to a hotel downtown to pick up a wedding party. Alejandro had told me he would be driving a wedding party to Patzcuaro – what he didn’t tell me was that they would be getting married at this event. So, on the way to Patzcuaro it was me, Alejandro, five bridesmaids and the bride and the groom. We were also followed by their photographer who was documenting every moment. 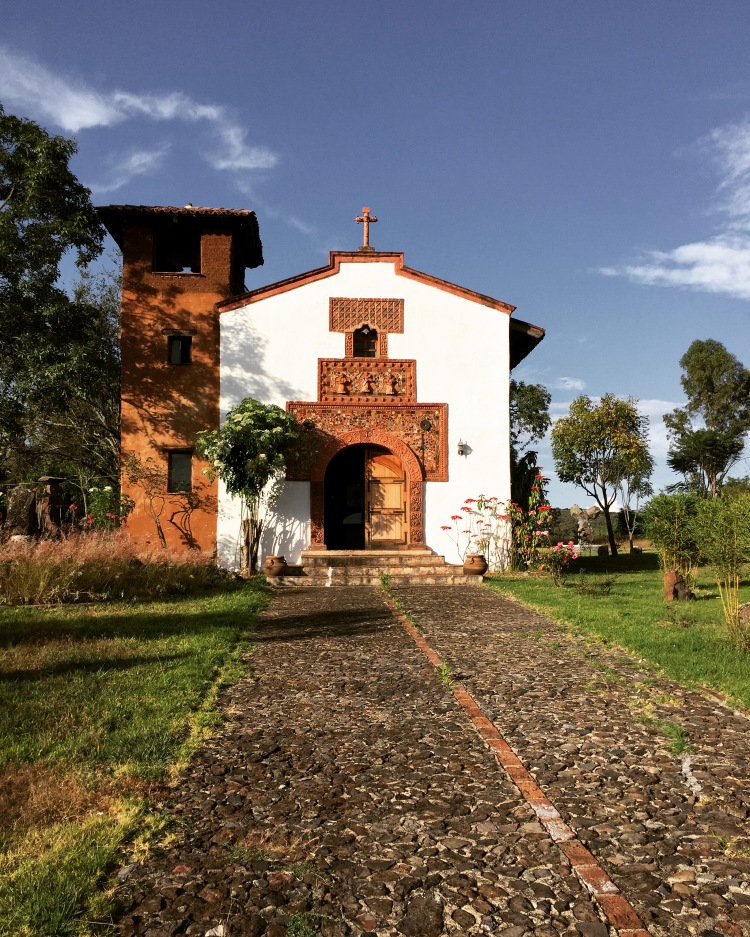 On the way to Patzcuaro, we stopped in Capula to visit the compound of Juan Torres. Juan’s town was famous for their clay pottery which dates back to pre-colonial times. Juan was the first person to take José Podada’s famous illustration of the skeleton woman, Catrina and turn it into a 3D work of art out of clay. His town soon started to follow his lead making Catrinas which, created their own unique style of folk art.

We finally got to the hotel in Patzcuaro around 6pm. The wedding was to start at 6:30pm and then the party to follow at 7pm. Apparently, I had included myself in one of hottest tickets of the year. The hotel owner Rafael hosts a special event every year for El Día de Los Muertos. The night includes a cocktail party and sit down dinner followed by a tour of three different graveyards. Tickets are $150 and are usually purchased a year in advance. He had already sold out for next year before the night was over.

The bride and groom were married at sunset on a little bridge over looking Lake Patzcuaro. It was very romantic. The cocktail party took place by the hotel’s pool. The whole hotel had been decorated for the event. Servers would bring out smaller versions of traditional Michoacán dishes for appetizers. There were older indigenous women in traditional clothing preparing the food in the kitchen.

Alejandro gave us an explanation of El Día de Los Muertos and the meaning of the ofrendas. The ofrendas, ofrenda meaning offering, are to honor people who have passed. The ofrendas usual consist of three levels which symbolize hell, earth and heaven. Their living relatives decorate the ofrendas with things the deceased loved such as, favorite foods or drinks. The four elements are also symbolized with the ofrendas, candles symbolize fire, beverages such as, beer or Coke symbolize water, the colorful paper banners with shapes cut out symbolize air and the flowers symbolize the earth. 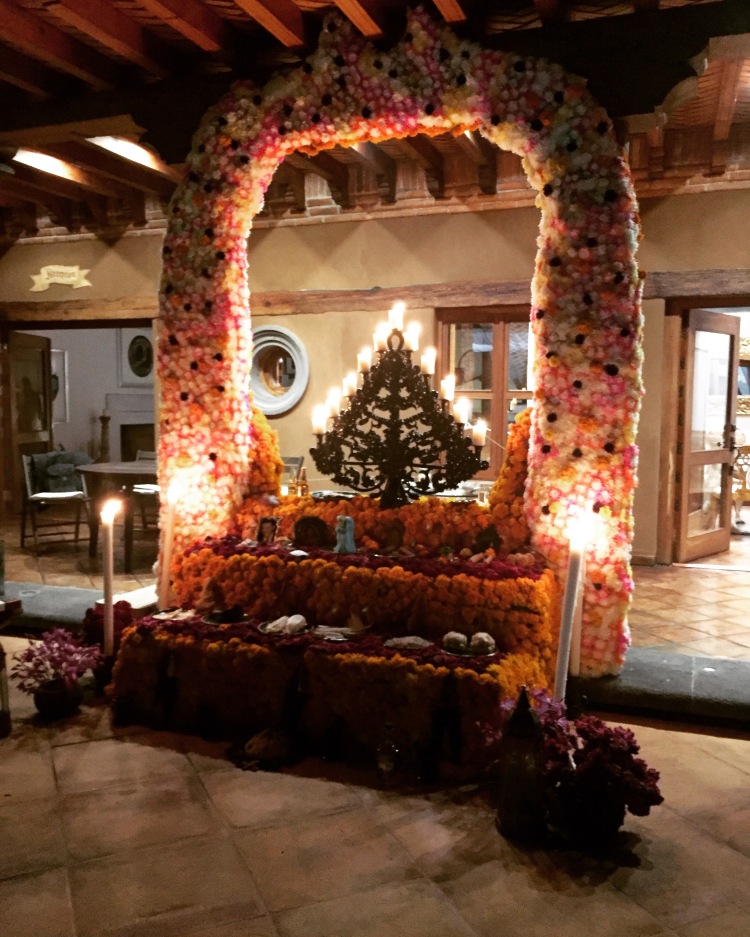 Families begin working on these alters weeks before the holiday which is held November 1st and 2nd. Families assemble the alters at the cemeteries where the deceased are buried on November 1st in the evening and stay until the early morning on November 2nd. They are usually singing and eating food throughout the night.

That night we visited three cemeteries. I have never seen anything like it in my life and it definitely wasn’t what I was expecting. The cemeteries were covered in marigold flowers, candles and ofrendas. I had imagined El Día de Los Muertos as an event where people dressed up like Catrina dolls with sugar skulls everywhere – that it would be irie, scary and terrifying. The celebration was quite the contrary, it was very peaceful and sentimental.

My favorite cemetery we visited that night was on an island in the middle of Lake Patzcuaro. Around 3am, in total darkness, we took a boat over to the island – it was so surreal, I felt like I was dreaming. When we arrived it was like we had traveled back in time. We were on a rural island in the middle of nowhere where, everyone was dressed in traditional Mexican clothing. Most of the inhabitants of the island are indigenous and this cemetery had the least amount of tourists compared to the others we had seen that night. 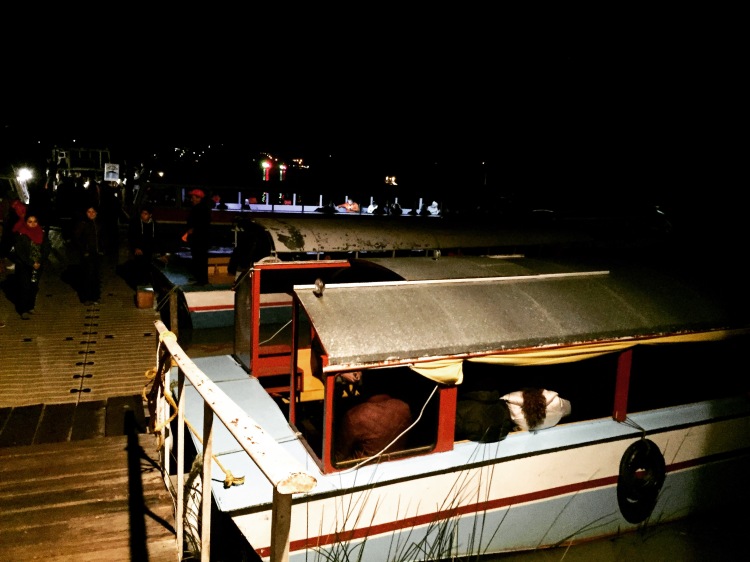 From the dock we walked up a cobble stone hill to the cemetery. There was even a church bell ringing which added to the ambience. The graveyard was so peaceful and tranquil – families were gathered around the ofrendas with 100s of lit candles. It was almost completely silent aside from the ringing of the church bell – the entire graveyard had been illuminated by candle light. 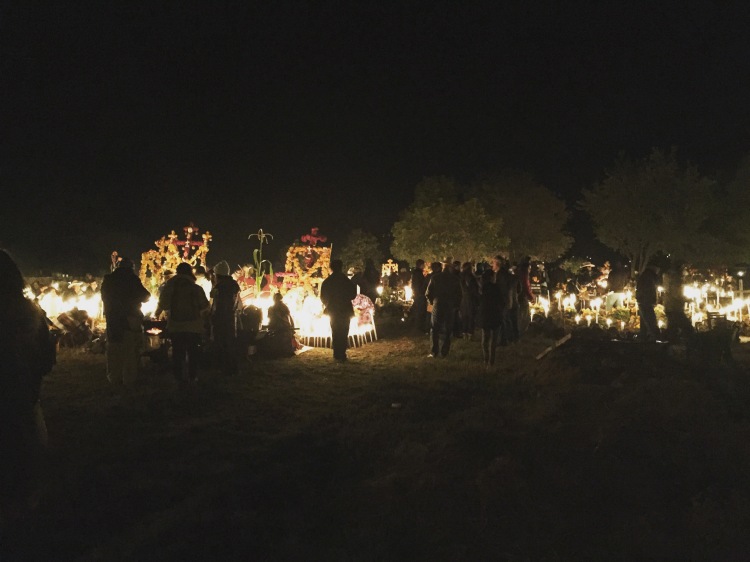 We headed back to the mainland around 5am and all loaded up back in the van. The drive back to Morelia was about 2 hours and included lots of twists and turns along steep cliffs. I was worried Alejandro would fall asleep at the wheel so, as everyone else in the van slept, I tried to engage him in conversation the entire way home. I was so tired and out of it, who knows what we talked about but I’m sure I wasn’t making sense.

We ended up getting back to Morelia around 7am. Exhausted and hungry I did what every Mexican would do, I bought some tacos for breakfast. I then fell fast asleep dreaming of the surreal night that had just taken place. This was definitely a night I’ll remember.