After spending a week in Puerto Escondido, it was finally time to hit the road again. Helena would take a flight to Mexico City and then eventually to Lima, Peru. Bernarda would go North as well, but to Oaxaca. Nelly and I had decided to head east to San Cristóbal de Las Casas on an overnight bus. Before leaving our hostel for the bus station, we met a guy named Mike from New Zealand who was on the same bus as us and staying at the same hostel in San Cristobal.

We boarded the bus to San Cristóbal at 7pm.  It was a 13-hour bus ride that arrived at 8am. ADO seems to be the only bus company in Southern Mexico. Our tickets were $500 MXN (about $25 USD). Most of the backpackers I’ve met while traveling seem to prefer overnight buses. By traveling at night you don’t lose a day of exploring or have the added expense of a hostel for the night. I, however, am not a fan. I have never been able to sleep on an overnight bus and I just end up feeling groggy and out of it the next day.

When we arrived in San Cristobal, it was FREEZING! We had just spent a week in 90-degree humid weather and San Cristóbal was a chilling 40 degrees in a mountainous climate. We had also gained about 7,000 feet in elevation. The combination of no sleep, elevation sickness, and the cold, left me feeling nauseous. We couldn’t check into our hostel, Puerta Vieja, until 1pm, so we dropped off our things and decided to wander around the city like zombies.

The guy at the hostel front desk recommended we check out an artisan craft market as well as a produce market in town. New cities are always hard to navigate, especially on no sleep. I’ve come to realize that cities in Mexico are generally laid out in the same fashion. Each city or puebla has a central town square with a large church, a park, and a gazebo.

After getting lost several times, we finally found the artisan craft market. It was a maze of colors. Everywhere you looked there were more and more things to buy. Embroidered flowered shirts, jewelry made from amber, leather shoes, and scarves. After walking through the market, we realized there were only about 5 different types of crafts, and after awhile they began to repeat themselves. Overwhelmed and exhausted, I suggested we head to the other market to find something to eat.

San Cristóbal’s produce market was a dark maze of grotesque smells, mud, and underwhelming produce. I had obviously been spoiled by the fabulous markets in Oaxaca. We eventually found somewhere to eat that looked busy enough; a sign that the food must be good. I had a lamb stew with a few pieces of tough meat and some tortillas. I couldn’t tell if it made me feel sicker or slightly better.

We returned to our hostel around 1pm to check in. I decided to sleep the rest of the day because I was still feeling pretty sick. Our hostel was open to the outside and unheated. The dorms were on the second floor and circled a large central atrium. Needless to say, our hostel was freezing and I was especially cold coming from Puerto Escondido. I put on all my warmest clothing, including my down jacket, and went to sleep.

The next day, Nelly and I quickly learned that our new friend Mike was a planner. He wanted to jam-pack our days with activities. It was really nice to have someone else plans things out for once, so we let him take the reins. Mike decided we were going to take a boat tour of Sumidero Canyon. I had seen photos of the canyon and it looked beautiful. I was excited to see it in person.

We were able to book the tour through our hostel, Puerta Vieja, and I the cost was around $250 MXN (about $12.50 USD). At 10am, the tour van picked us up at the hostel. The van was already almost full of other tourists they had picked up from different hostels. In the van we met a Chilean guy named José who was also traveling by himself.

After a 45-minute drive, we arrived at the dock where we boarded the boat that took us to the canyon. We all put on life jackets and climbed aboard. 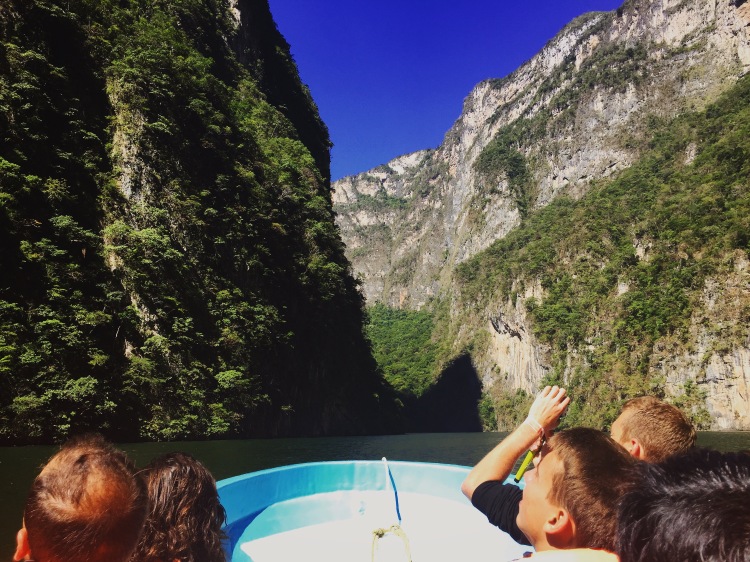 The canyon was breathtaking. I had never seen anything like it before. The walls of the canyon were so high that it made us feel like little microscopic nothings compared to them. Some of the canyon walls were covered in moss and had small waterfalls. We even saw a few crocodiles. Unfortunately, there was a lot of garbage in the water, which was sad to see. I learned that most of the trash comes from rivers that flow into the canyon through Guatemala and other Central American countries. Chiapas is a beautiful state with lots of natural beauty, varying from mountainous forests to jungles. However, being one of the poorest states in Mexico, it has terrible road conditions and I wondered if this also added to the city’s inability to keep the canyon water clean.

We loved the canyon tour so much we decided to do another tour the following day. The longer one started at 8am and didn’t return until 9pm. The tour was to see the Montebello Lakes and a waterfall called El Chiflon. We were told we could swim in the lakes, which meant warmer weather! 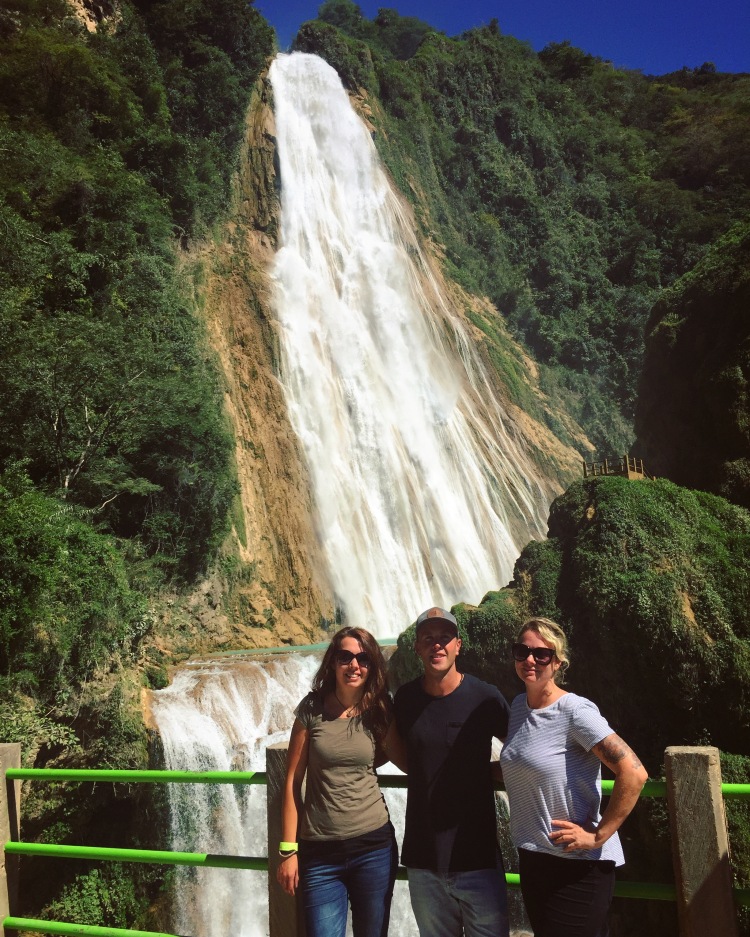 We quickly realized that everyone else on the tour was a couple and they all seemed to own selfie sticks. After about a 2-hour drive, we arrived at our first stop, El Chiflon. Everyone in the group except for the three of us was fluent in Spanish, so our tour was in Spanish. The tour guide lead us up a trail, stopping at several viewpoints, all of which revealed more and more of the beautiful waterfall. At each viewpoint all the couples would stop, pull of their selfie sticks and take a million photos in different poses.

We were told to meet back at the van at 1:30pm so they could take us to lunch. I was absolutely starving by that point. The van finally arrived at 2pm, right on Mexican time. The bus driver said we would stop to eat in 30 minutes. At 3:30pm we arrived at the first lake of the tour. It was clear that there was nowhere to eat and it was freezing cold so there would be no swimming. The lake looked like any other lake from Washington State. Dark blue surrounded by pine trees and fog. I came all the way for this? All the couples from the tour thought it was the best thing ever. They got off the bus and took a million photos with their selfie sticks.

I asked the driver when we would be eating and he said in about 20 minutes. We piled back into the van and arrived at another lake, a little more beautiful than the last but still underwhelming. Again all the couples got off the bus and took a million photos. I didn’t even want to get off the bus. My stomach was rumbling, it was freezing cold and I was done being around people.

Once everyone piled back into the van, we moved on to the third and final lake. There were “restaurants” that consisted of little concrete huts with dirt floors. The bus driver said this is where we would be eating and the meal should cost around $100 MXN ($5 USD). That might not seem like a lot but it is incredibly expensive by Mexican dining standards. I can usually fill up on street food for $40 MXN (about $2 USD) and $100 MXN would buy me a very nice meal in a fancy restaurant.

All the women working in the huts began yelling at us, trying to get us to come to their restaurants. Nelly and I chose the hut with the least aggressive woman. The hut was dirty and cold and it looked as though the raw meat had been sitting out all day. We had no other options at that point so we ordered. The food wasn’t terrible but it wasn’t worth $100 MXN.

After lunch, we boarded rafts made from logs which took us to a little island in the middle of the lake. I wanted to be adventurous. I wanted to join in and enjoy myself but I just couldn’t. I decided to wait on the bus while everyone else boarded the rafts to the island. I was seriously over this tour, the cold, and San Cristobal. I was ready to hit the road again, hopefully to somewhere warm. Luckily, the three of us had plans to head to Palenque the next day.