I wasn’t ready to leave Valladolid- there were still things I wanted to see and do but I had to make a reservation a few weeks in advance for my hostel on Isla Holbox. I had heard from other travelers that Tribu Hostel was the place to stay on Isla Holbox and it’s a popular place to stay so it’s a good idea to book a week or so in advance, especially if you’re traveling during high season.

Tribu Hostel is a fairly new hostel with wonderful facilities, a huge kitchen, events every night and a wonderful staff. It’s a great place to meet people as well.

To get to Isla Holbox from Valladolid I took an ADO bus to Tinzimi. When you arrive in Tinzimi you need to leave the ADO bus station, turn right, then another right at the corner then enter the MAYAB bus station. From there you take another bus to Chiquilá. The bus leaves daily at 4:00, 10:00, 12:30, 14:10 and costs $90 MXN (about $4.50 USD).

Tinzimi is a small town and there usually aren’t many other tourists. I was lucky there was a cute German couple waiting for the same bus to Chiquilá. They even kindly watched my bags while I used the bathroom.

The MAYAB bus to Chiquilá was disgusting. It was definitely not up to ADO bus standards. The bus was also a city bus- people would get on at various stops and get off a few stops later. Some kids even got on the bus selling ears of corn. Mexicans love their corn and it’s everywhere. They eat corn tortillas with every meal. They sell kernels of corn mixed with mayo, lime and chili on the streets. They even have drinks made from fermented corn. You’d think they’d be corned out by now but they’re not.

Anyways, I had to pee the entire bus ride and there was no bathroom. It was the worst. With every speed bump we went over I was sure I was going to pee my pants. When we finally arrived at Chiquilá, three hours later, I found a bathroom and peed for what felt like forever. Afterwards, I reached the dock just in time to see the boat to Holbox leaving! I’d have to wait 30 minutes for the next one.

When I got to the island I decided to walk to my hostel since Google maps said it’d only be a 10 minute walk. You definitely don’t need to take a golf cart taxi from the dock to get to your hostel. The part of the island that is inhabited is so small that you can easily walk anywhere.

On the island there were giant puddles everywhere that I had to avoid. I could tell the island had just experienced a heavy downpour. There aren’t too many cars on the island- most people drive golf carts. There are no paved roads either, the roads are dirt. Surprisingly, however, they do have some sidewalks.

I arrived at my hostel hungry and tired. I wanted to find some company for dinner so I started asking around in the hostel if anyone knew a good place to get dinner. I met a woman from Mexico City named Diane who told me about an amazing taco place called ‘Taco Quedo’. She was going there with some other women in about an hour and asked if I wanted to join. Uh, yeah!

Taco Quedo is on the same street as Tribu just two blocks east. The tacos there were seriously the best I’ve ever had (and I ate a lot of tacos in México). I highly recommend eating here and ordering a chorizo taco. They open at 6pm daily and are only open for dinner.

The next morning I was ready to hit those beautiful beaches I had heard so much about. I wanted to see what this tropical paradise had to offer! I had overheard two women in my hostel room talking about going to the beach as well, so I asked if I could join them. My new friends, Nili from Israel and Franzie from Germany and I enjoyed a relaxing morning on the beach swimming in the crystal blue water, lounging on the white sand and telling stories of past travels.

The next day the three of us decided to rent a golf cart. We had seen other tourists driving them and thought it looked fun. It was definitely an interesting experience but I wouldn’t recommend renting one. The golf cart got stuck in reverse twice and the brake didn’t work, which landed poor Franzi, who was riding in the back, into the bushes once and another time into a building.

On Holbox the area where you can actually drive a golf cart is so small that it’s not necessary to use one to get around. You can easily walk anywhere you need to go. There is a large amount of the island that is uninhabited. You can reach it by walking east through the ocean. There actually isn’t a land path. The water level on Holbox is so shallow though, so it isn’t a problem. I heard it’s very serene and beautiful but unfortunately I didn’t get the chance to explore it. There are also lots of mosquitos in the evening so bring repellent! 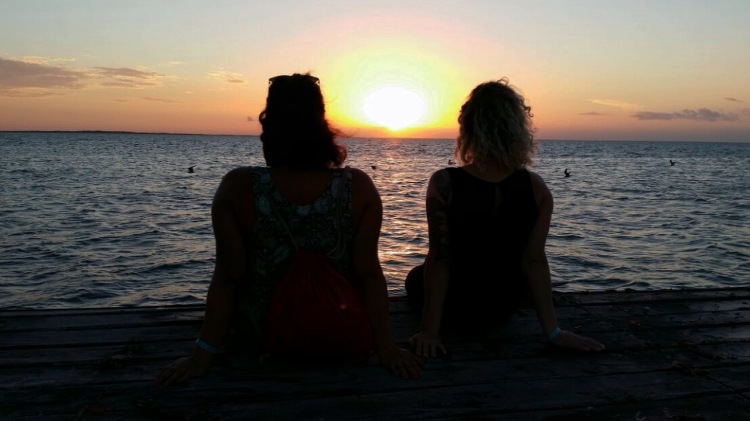 Getting to Holbox Island:

BY BUS FROM CANCUN AIRPORT:

There is an ADO bus that runs approximately every hour from 7:00am to 10:00pm. It leaves from airport Terminals 2 and 3 and goes to the downtown central bus station in Cancun City on Tulum Ave.

Many flights arrive in Cancun too late to make these connections so you might have to spend one night downtown at a hotel close to the bus station.

BY BUS FROM CANCUN CITY:

BY BUS FROM MERIDA:

The only bus we know that travels to Chiquila from Merida is a late nighter departing from Merida’s main bus terminal at 11 pm.

You could also take a bus to Valladolid then find a ride to Chiquila if you had to.