Desert de la Tatacoa, located about 6 hours South of Bogotá, had been recommended to me by someone I met while traveling in Mexico. It is a place that is often overlooked by tourists and rarely visited by locals. It’s not actually a desert at all but a dry tropical forest that has dried up over centuries. The “desert” is surrounded by beautiful mountains and has been nicknamed the red desert for the unique red earth that makes up the terrain. It is easy to get to Tatacoa, it just takes a little time. To get there from Bogotá or Cali you can either fly into Neiva on a small plane which costs about $135 USD roundtrip from Bogotá, or $209 roundtrip from Cali. You can also get there by bus, which is what I did. I took a bus from Bogotá to Neiva, which I caught at the Terminal de Transporte de Bogotá Station. It’s about a five to six hour bus ride from Bogota, depending on the bus line and the time of day. When you arrive at the Neiva bus station, catch a taxi collectivo (a taxi collectivo is a taxi or small bus of sorts that takes many different people going in the same direction) to Villavieja which takes about an hour, then eventually to Tatacoa which will take you out to the actual “desert” and is another 30 minutes.

I was traveling with an Austrian woman named Hedi, who I had met in Mexico. We had been told many different and confusing ways to get to Tatacoa and how long it would take. One travel blog said to catch the bus to Neiva from the South Terminal in Bogotá. Apparently, the South Terminal is very sketchy and it’s not a good idea for tourists to go there. You can catch any bus you need at the Central Bus Terminal or Portal Norte.

At one of the ticket counters in the Terminal de Transporte de Bogotá, Hedi and I asked  how long it would take to get to Neiva. They told us about seven to eight hours. Believing that, we decided to make it an overnight trip so as to not waste an entire day traveling. Hedi and I both hate overnight buses but neither one of us said anything about it because we thought the other one wanted to take the night bus. We chose an 11pm departure, meaning we would arrive in Neiva around 6 or 7am, and then we would take a taxi collectivo to Tatacoa.

The “overnight” bus ended up only taking six hours, so we arrived in Neiva at 5am. The collectivos to Tatacoa didn’t start running until 8:30am so we had to wait. Both of us were unable to sleep on the night bus and Neiva was extremely hot compared to Bogotá, even at five in the morning. Hedi and I sat in the Neiva bus terminal on the floor for the next four hours, not saying much, while we silently regretted our decision to visit the desert. 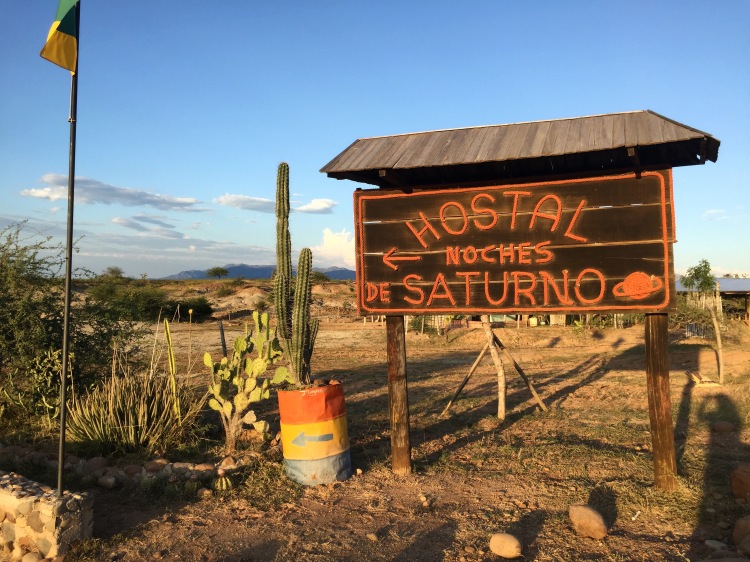 Finally, around 9am, we boarded the taxi collectivo and headed to the desert. We had heard great things about a place called Noches de Saturno and, as there aren’t many places to stay in Tatacoa, we went with the recommendation. It is worth mentioning that there is no A/C at Noches de Saturno. I don’t believe any of the accommodations in Tatacoa have it. Noches de Saturno’s saving graces were their pool and the delicious meals they served. There is nowhere to cook your own food so be aware of that. It’s a good idea to bring some snacks like nuts and fruit to eat between meals.

When we arrived at the hostel at 10am we were hot, exhausted, and hating life. We checked in and ordered breakfast. While waiting for our food, we talked to other people staying at the hostel about what there was to do in Tatacoa. We quickly learned that there isn’t much. It’s too hot to do anything from 11am until about 4pm. There are some early morning tours available to book and a planetarium where you can go at night to learn about the constellations.

After breakfast, we headed to our room to take a nap. The room was unbearably hot but we were exhausted from having not slept the night before and we fell fast asleep. A few hours later, we woke up drenched in sweat and decided to take advantage of the pool. There wasn’t much to do other than lounge around by the pool or read in the shade. There’s no WiFi and not even an outlet to plug anything in. The fan and light in our room were powered by a car cigarette lighter outlet and I had no idea where it was getting its power from.

For the next few hours, we went back and forth between swimming in the pool and getting out to soak up the heat. We would lay on our beach towels until we couldn’t stand the heat anymore and then we would jump back in the water. The pool was covered with a black net for makeshift shade and the sun was too unbearably hot to even think about trying to tan. 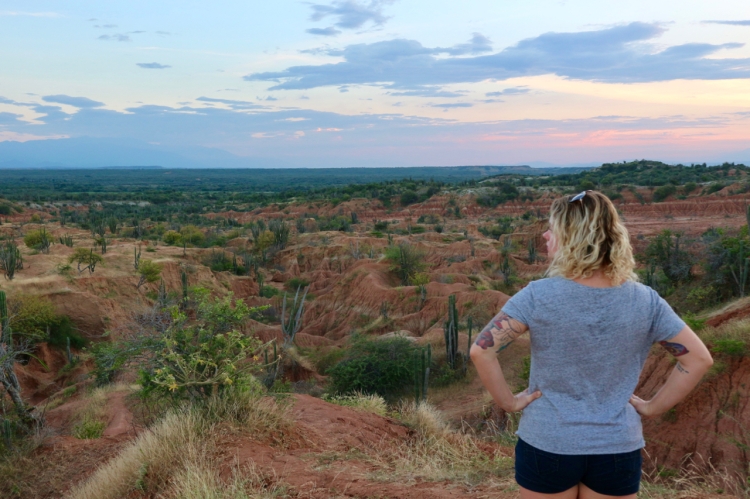 After our relaxing day of not doing much, we decided to get out and take a walk to watch the sunset. I know it sounds like I didn’t have the best time there but Tatacoa is truly an amazing place. The dirt is a rich earthy red, so it was obvious why it is called the red desert. There are so many peaks and valleys, tiny nooks and vast canyons. Some parts of the desert look like labyrinths you could get lost in. I felt like I was on Mars. The landscape reminded me of deserts I have seen in Arizona. Watching the sunset over the desert was breathtaking. The pink, red, purple, and orange colors that illuminated the sky as the sun set were so intense and vibrant. 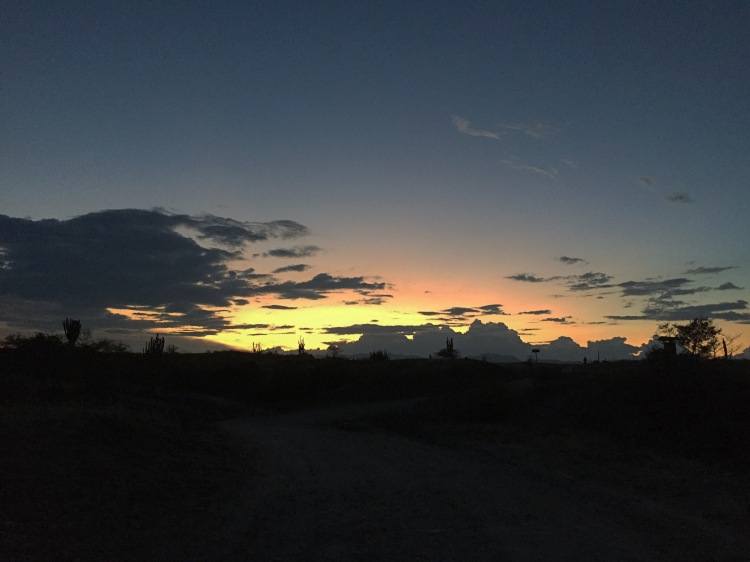 There’s a planetarium called Observatorio Astronómico de la Tatacoa (OATA) close to the hostel where you can sit outside under the actual stars for an explanation of all the constellations. It starts every night at 7pm and costs $10,000 COP (about $3 USD). However, it is in Spanish.

Hedi and I were feeling a little out of it from the heat, our adventurous night of riding buses, and hanging out in bus terminals, so we decided to save our money and not go to the planetarium. Looking back on this now, I regret that choice but c’est la vie! We ended up having a nice dinner with another traveler from Germany. After dinner, Hedi suggested we lay a blanket down next to the pool to stargaze. It’s amazing how many stars you can see in the sky when there’s no light pollution.

Tired from our eventful journey the night before, we called it an early night. When I’m traveling I always bring a sleep mask and ear plugs. It ensures I have a good night’s sleep. Hedi, on the other hand, wasn’t as prepared and in the morning she informed me of what had been going on in our neighbors’ room. Apparently. they had an interesting night of fighting, loud makeup sex, and then fighting again. I’m glad I was able to get a good night’s sleep but the way Hedi described the night’s events, I was also a little bummed to have missed out on all the excitement. 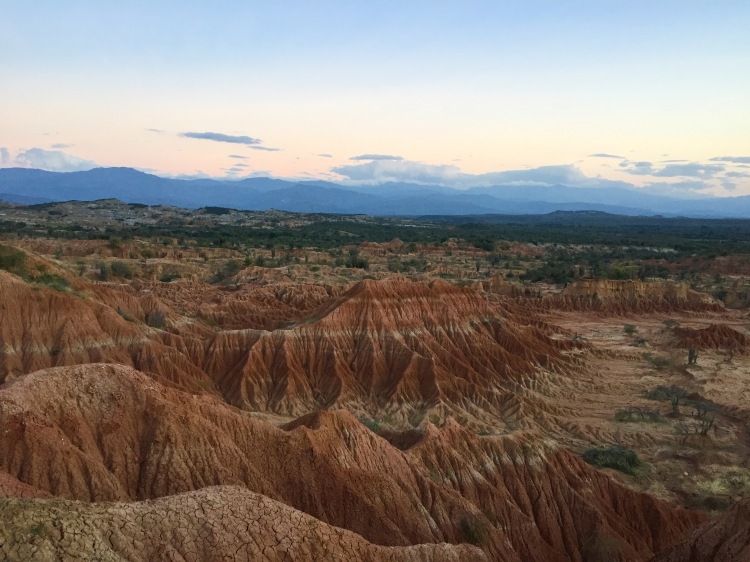 We got up around 5am the next morning to watch the sunrise. The desert was so tranquil in the morning. The only noises we could hear were those of the hordes of goats living on the property. They would roam around munching on grass until they lost each other and then call out to locate one another again. 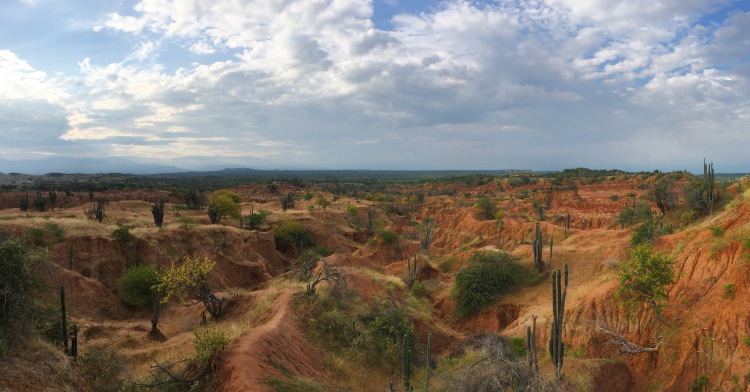 After breakfast, we had had enough of the desert and were ready to go back to the city. We took a day bus back to Bogotá only because we had a flight in a few days leaving from Bogotá to go to the Amazon. If you end up deciding to visit Tatacoa, I would recommend making it a stop over on your way from Bogotá to Cali. There are no direct buses to Tatacoa from Bogotá or Cali but there are direct buses to Neiva which is where you can catch a collectivo to Tatacoa.

How to get there from Bogotá:

Fly to Neiva (about $135 USD roundtrip) on Avianca.

Or take a bus from the Terminal de Transporte de Bogotá to Neiva.

These bus lines go to Neiva from Bogota:

Once in Neiva take a taxi collectivo to Villaveija. Most drivers will take you straight to Tatacoa from there, just have a conversation with the driver beforehand. It should cost around $30,000 COP about $10 USD.

How to get there from Cali:

Fly to Neiva (about $209 USD roundtrip) on Avianca.

You can take a bus from Cali to Villavieja or Neiva however it takes a little over 10 hours because there is a mountain range you have to go around.

These bus lines go to Neiva from Cali:

My best advice would be to fly from Bogotá to Neiva, stay at the desert for a few days then fly to Cali. It isn’t the cheapest option but it will definitely save you the most time and be the most comfortable.

This website seemed to have more information than theirs and is also in English. http://www.tatacoacolombia.com/hoteles/21-hostal-noches-de-saturno-desierto-de-la-tatacoa

There are many companies in which you can book tours with. Where you are staying can help you arrange it.

Observatorio Astronómico de la Tatacoa or OATA is the observatory located next to Noches de Saturno.

Be warned they only speak Spanish which is true for most people in this part of Colombia.

2 thoughts on “Off the Grid in Desierto de la Tatacoa”