After spending a week in Puerto Escondido, it was finally time to hit the road again. Helena would take a flight to Mexico City and then eventually to Lima, Peru. Bernarda would go North as well, but to Oaxaca. Nelly and I had decided to head east to San Cristóbal de Las Casas on an overnight bus. Before leaving our hostel for the bus station, we met a guy named Mike from New Zealand who was on the same bus as us and staying at the same hostel in San Cristobal.

We boarded the bus to San Cristóbal at 7pm.  It was a 13-hour bus ride that arrived at 8am. ADO seems to be the only bus company in Southern Mexico. Our tickets were $500 MXN (about $25 USD). Most of the backpackers I’ve met while traveling seem to prefer overnight buses. By traveling at night you don’t lose a day of exploring or have the added expense of a hostel for the night. I, however, am not a fan. I have never been able to sleep on an overnight bus and I just end up feeling groggy and out of it the next day.

END_OF_DOCUMENT_TOKEN_TO_BE_REPLACED

Before my trip I made three goals for myself, to learn Spanish, how to surf and dance salsa, or the three Ss as I like to call it. My new roommates Bernarda and Nelly in Puerto Escondido as well as my Austrian traveling partner, Helena had similar goals so we all decided to take Spanish and surf lessons together. After doing some research online I found a Spanish school close to our hostel, Instituto Lenguajes de Puerto Escondido. It had good reviews and was reasonably priced at $8 USD an hour, so we decided to head to the school to check it out.

The four of us loaded up into a taxi instead of walking because Helena had sprained her ankle the day before. On the way there we realized it was a little farther than we had originally thought, which meant we would have to take a taxi there every day. Bernarda began complaining about the distance and said she probably wouldn’t end up doing lessons there, Nelly and Helena were in agreement. I was thinking to myself, fine then! Find your own damn Spanish school!

END_OF_DOCUMENT_TOKEN_TO_BE_REPLACED

My next stop after Oaxaca was Puerto Escondido! I had put it down on my maybe list of cities to visit. Most of the backpackers I met in Oaxaca were headed either there or Muzunte, a smaller beach town close to Puerto Escondido after Oaxaca. One of my goals for this trip was to learn how to surf and Puerto Escondido is famous for surfing so it was my obvious next choice.

I was happily surprised that Helena, my Austrian friend decided to join me! To get to Puerto Escondido from Oaxaca there are two options, you can take an ADO bus which takes about 10 to 12 hours or take a taxi collectivo which only takes about 6 to 7 hours. The ADO bus goes around the mountains and is a much smoother ride while the van goes through them, it takes less time but in my opinion is not worth it.

END_OF_DOCUMENT_TOKEN_TO_BE_REPLACED

When I arrived to Oaxaca I had chosen to stay in a co-ed dorm in my hostel. I thought why not? More opportunity to make friends. At first the room was completely occupied but slowly as the week went on people began to trickle out and no one was coming to replace them. There was an older man in his 70s, who was a chain smoker with a terrible cough and had been in my room the entire time I had been there. He didn’t look like he was going anywhere anytime soon. At breakfast one morning I asked the two remaining guys in my room when they were leaving, they said today, so after that it would be down to me and the old guy in the room. I decided I had better move into an all female dorm.

That morning a new woman arrived at the hostel and was staying in my new dorm room. Asta is from Norway and backpacking Mexico solo as well. She will eventually fly to Colombia where she will spend three months. Asta LOVES Colombia, she thinks it’s the greatest place on Earth. She was compelling me to skip Central America and just fly straight there after Mexico.

END_OF_DOCUMENT_TOKEN_TO_BE_REPLACED

After Guanajuato, I spent the night in Mexico City with my friends Cinthia and Perla before catching a morning bus to Oaxaca. The 7 hour bus ride would be my fourth this week and I was exhausted from traveling around so much. I decided I would stay in Oaxaca for a week and take a Spanish and cooking course. In addition to rest, I needed a little more structure to my day and I also desperately wanted to improve my Spanish.

Just as I was about to doze off on the bus a rock was thrown at one of the windows! It immediately shattered into a million little pieces. Everyone quickly moved to the other side of the bus as the shattered pieces of glass began to fly into the bus. The bus driver knew the window had been broken but didn’t stop. I’m not sure if it was because there was no where to pull over or if it was because he didn’t want to stop anywhere near the person who had broken our window. Welcome to Oaxaca…?

END_OF_DOCUMENT_TOKEN_TO_BE_REPLACED

While I did enjoy staying with my host, Angel in Morelia, I was very lonely. I was also missing Cuba terribly. There was something about that Caribbean vibe that I missed. Maybe I was just missing constantly being drenched in sweat. I decided to change course – instead of going North into the cold as planned, I would go South and start staying in hostels to meet other travelers. Before making my way South I decided to first stop in Guanajuato, I had heard amazing things about this city and didn’t want to miss it.

On the bus ride to Guanajuato I met a woman named Grecia – I hadn’t had anyone to talk to in over a day so, I was so exited to make a new friend. Grecia grew up in Oregon and ran away from home to Mexico when she was 16. Her parents are Mexican so she speaks Spanish and has dual citizenship. She got a job on a border town then eventually found her way to Morelia where, she’s been living for 7 years.

END_OF_DOCUMENT_TOKEN_TO_BE_REPLACED

Back in Mexico City and at first I was enamored! The delicious food on every street corner, the abundance of everything – including water and medicine, the ease of getting around and most of the comforts of home. After the first few days the novelty of it all wore off and I began to miss Cuba. I still miss Cuba. I couldn’t tell you why exactly. Cuba had really pushed my limits – I had experienced every emotion there from depression and heart break to love and pure bliss. Even after all the ups and downs, I still love Cuba. I think what I really missed was the friends I made there and the times we shared.

In Mexico City, I was luckily able to stay with the same Couchsurfing host again in the neighborhood of La Condesa. After sitting in traffic for an hour on my way from the airport to my host Gerardo’s, I met up Cinthia and Perla to grab tacos! I quickly filled them in on everything that had happened in Cuba while I’ll filled myself up with tacos. In a way it I felt like I was back home.

END_OF_DOCUMENT_TOKEN_TO_BE_REPLACED

On average Cubans make around $20 a month and don’t even come close to making ends meet. Many of them see tourists as an opportunity to them help them survive. This does not go for all Cuban people, once you get outside of Havana the attitude and motives starts to change. However, here are 4 scams that I have personally fallen victim to in Havana. Hopefully this will help you avoid them before visiting Cuba!

END_OF_DOCUMENT_TOKEN_TO_BE_REPLACED

I met a new Cuban friend named Enzo who told me about an Afo-Cuban place that had free live music on Sundays, Callejón de Hamel. It’s located on San Lazero right by the Centro Habana hospital. I went during the middle of the day in the hot blazing sun to check it out.

END_OF_DOCUMENT_TOKEN_TO_BE_REPLACED 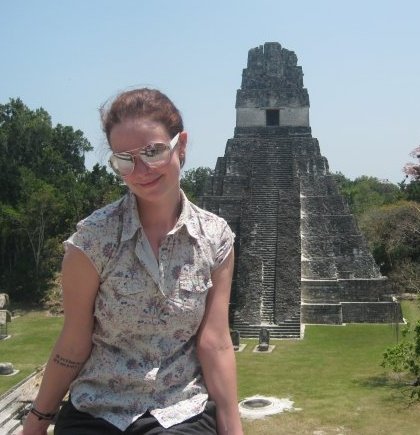 I fell in love with travel at the age of 22. I impulsively purchased a ticket to Guatemala and signed up to volunteer at an orphanage. I went knowing nothing about the culture, what to expect, or who was picking me up from the airport. I left it all up to chance and the trip ended up being one the best months of my life. I realized two things about myself while in Guatemala – I love travel and I love Latin American culture.

When I returned home, I made a vow to myself that one day I would backpack from Belize to Brazil. Fast forward six countries over seven years, and my love for travel and Latin culture has not changed. However, I still have not accomplished the goal I set for myself those many years ago. The “right companion” or the “right time” always made for suitable excuses. END_OF_DOCUMENT_TOKEN_TO_BE_REPLACED